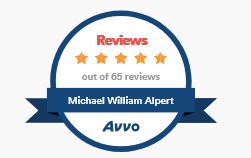 Here are recent reviews that have earned us a top rating by AVVO and accolades from Clients and peers.

“Michael helped me resolve 5 default convictions. If not for his knowledge and experience as to how Nassau County addresses Traffic violations, I would probably have around 11 points on my license, as well as have paid much more in fees. Michael was hands on and informative from my first phone call. He ended up accomplishing what he told me was possible. Today, I have 0 points on my license and ended up paying around half of what I would have had to pay, if my original judgement wasn’t removed, and that included Michael’s attorney fee. Based on my experience, I would strongly recommend Michael to others who have Traffic Ticket issues in Nassau County!” – Sol

No points on my license thanks to him

“I found Michael’s information through google and was making my decision on what attorney to hire based on reviews left by others that has previously hired him. From the first phone call I knew right away he was the person I wanted to handle my cell phone ticket. This was my first ticket ever and I was very nervous about who to hire, and what the outcome might be. Michael was very helpful and knowledgeable and answered all of my questions and put me at ease when he said he would represent my case. I’m very glad that I did and now my case is closed, and the ticket was dropped to a parking violation. No points on my license thanks to him. I highly recommend him with any traffic violation issues! Thanks again for all of your help! I will definitely be referring him to any friends or family that may run into the same issue I did.” – Antonella

Reduced my points to zero

“I would highly recommend Micheal Alpert to handle any traffic tickets/violations any time! He has a great personality. He took care of my traffic tickets like a true professional. I was amazed how was able to reduce my points to zero. So if you are looking for a lawyer to represent you, do not hesitate. Call him and I assure you, he will make you very happy!” – Elona W.

The best at what he does

“Mike is the best at what he does. If you find yourself needing an attorney in this area this is who you should be going to. I approached mike with a cell phone violation and he was able to get the infraction reduced to a parking ticket. The awesome results are not the only thing that makes Mike the best. He also does a good job of letting you know all your options each step of the way and keeps you informed as the process moves forward. best at what he does.” – Paul B.

Brought my points down to zero

“Mr. Michael Alpert was professional and great to work with. He is trustworthy and honest. He brought my DMV points from 13 points down to zero. I would highly recommend him to anyone. He saved me from having my license suspended, I am grateful to him.” – Mariam

“Michael represented me regarding a speeding ticket which could have resulted in very high fines and many points on my license. He was extremely responsive to my texts, voicemails and emails which put my mind at ease. The outcome was more than I had hoped for… reduced fine AND reduced points.” – Anonymous

Gets the job done

“I went through a lot of lawyers that couldn’t get the job done. I live in the state of Colorado now and Michael Alpert handled all my court fines and cleared all my warrants from New York without me going back to appear. I found Michael from a friend from Facebook. It was the best decision I’ve ever made. Although I won’t need Michael’s services anymore. I highly recommend this guy to get THE JOB DONE!!!! ONCE AGAIN MICHAEL I THANK YOU SO MUCH FOR HELPING ME OUT.” – Matthew

“I had a traffic ticket in which this was my second offense of the same thing. Usually never used a lawyer but found Mike online and called him up. To put it into simple words, he was able to take me from having an extra 5 points on my license to 0 POINTS!! Couldn’t be happier. Will definitely recommend to friends and family if needed.” – Mike

Excellence at its finest

“I got into a car accident totaled my car and the police officer gave me two tickets just to be a jerk. I googled traffic ticket lawyers and I found him I’ve never hired a lawyer before so I was very nervous but I called him several times he explained everything and answered any question I had, as he promised, I went from 6 points on my license to zero. I’m so happy I took the chance with him. He was awesome if I could give him 10 stars I would. I will always use him as my lawyer thanks so much!!!! Also his prices are very reasonable.” – Kimberly

“Michael is a very professional and excellent lawyer to work with. He made the process of fighting our tickets very easy, and he kept great communication with us during the entire process.” – Stephanie W.

“Michael helped me with taking care of my traffic tickets. I loved the whole process. The end result was no points, as well as money savings. I would highly recommend him.” – Anonymous

“I found Mr. Alpert on the internet. I needed a lawyer to help me clear up some outstanding tickets in Nassau County. I live in Brooklyn and couldn’t get time off from work to get out to Nassau. Mr. Alpert did all the work for me, got my tickets reduced and even got points taken off my license. I always spoke directly to him and when I emailed him he always responded back in a timely manner. He was very helpful and knowledgeable. Also, his fees were reasonable. It was definitely a very pleasant experience and I would recommend him to anyone who needs a lawyer. And of course I would definitely use him again. But hopefully I won’t need to, at least for traffic violations.” – Tiara T.

“Michael is highly recommended. We hired him to handle some traffic violations. He was able to knock 5 points down to zero points and some minor fines. His fees are reasonable as well.” – Alan N.

Expect nothing but the best

“Expect nothing but the best. 18 points reduced to zero.” – Melwin W.

“Mike was very informative and straightforward with everything in my case. I had 3 tickets that were over a year old, ranging from a no signal violation to a speeding violation of 90 over 55 which all lead to a suspension. After I consulted Mike for the first time, within 10 days, I was able to take care of all my tickets and my suspension. I highly recommend him; he is a great lawyer.” – Eric

“Mr. Michael Alpert represented me regarding traffic tickets I received. I cannot say enough about how satisfied I am with his representation.I recommend Mr. Alpert services to anyone in need of a great lawyer.” – Thomas

“I recently retained Mr. Alpert to assist with my son’s traffic violation. I initially reached out to him and despite being away he responded. He was consistent and timely in his response. My son had 2 court dates. He represented him in both instances. The charge of aggregated unlicensed operator could have come with hefty fines and possible jail time. He negotiated to no points assessed, no jail time and minimal fee. Hands down he was more than I expected. I will be using him again and recommending him to my friends and family. He is honest and knows the law.” – Norma D.

“I endorse this lawyer. I have known Michael since we attended Hofstra Law School. He has a wide array of expertise, offering expert counsel in many areas. He was of particular assistance to my wife in connection with vehicle/driver’s license issue, securing full dismissal of the matter. He also drafted our wills. I have full trust and confidence in his abilities and would seek his counsel on almost any matter. In sum, he is a terrific attorney.” – Richard B.

“I had a car forfeiture case which has been settled by mike. He responded back to me as quickly as he can and answered me all the questions and finally came up with a wonderful settlement with the plaintiff. I felt him as a friend rather than lawyer while working with him. I recommended my friend to him for and even he is happy.” – Rohit

“I hired Mr. Alpert to take care of my son’s traffic violations. He is extremely friendly and will answer all your questions. I’ve emailed Mr. Alpert after business hours and on weekends expecting an answer the following business day but he answered within a few hours, sometimes even within the hour. He handled all my son’s traffic violations with amazingly good outcomes. I don’t know how things work in the courthouse but I feel like Mr. Alpert’s great personality along with his obvious knowledge of the law make him very well liked and definitely helps him get the positive outcomes for his clients. I have recommended him to family and friends, they have also had a positive experience. You will not regret using this lawyer.” – Dawn

“I got two summonses, One was improper passing. And the other was improper lane change . I found Michael Alpert’s Office on the Internet. He got one dismissed, and the other one he got lowered to jaywalking . I was very pleased for what he did for me. I would recommend him for any driving violations. And yes I would use him again.” – Ronnie

“Mike did a good job overall. He was not that expensive and was very considerate. Always returned calls and answered questions.” – Donald

Michael Alpert is the greatest attorney I have ever worked with! He is very professional and always answers any questions I may have right away, in my many experiences working with Mike I have had nothing but great results! Highly recommended!! – Dana

Mr. Michael Alpert is very professional and personable attorney. Will get you great results in a timely fashion. I have already shared his information with a friend. – Tammy

“I highly recommend Mike for any legal issue or traffic violation. When you think the cards are stacked against you in Nassau County and you need help navigating through the quagmire, Mike Alpert , Esq is your man!” – Kenneth

He went above and beyond

“I was referred to Michael by a co-worker who said he was the best . Man was he right, he was able to take a bad situation for me having to pay hundreds of dollars in fines and points on my license and turn it into a minimal traffic ticket! I highly recommend Michael he went above and beyond and communicated with me throughout the process.” – Selden K.

“Terrific! My wife received notice from the Nassau County DMV that she was penalized six points and fined $300. Mr. Alpert was able quickly to reduce the infraction and eliminate the points. Professionalo in every way.” – Steve G.

“Michael is the absolute best!!! He helped me with an 8 point speeding ticket and got it reduced to no points!!! I’m extremely happy with his services. He was great with me through the entire process, constantly touching basis and keeping me informed!! You will not be disappointed!!” – Margareta P.

Tell Us About Your Case