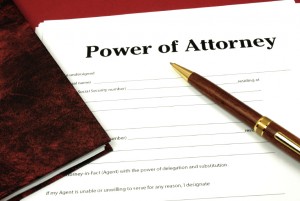 Speak to your New York estate planning lawyer and you will find out that The Durable General Power of Attorney (known as the “POA”) is a vital tool for families in New York who are caring for an elderly or disabled relative, especially when cognitive impairment and dementia is an issue. The Power of Attorney is a highly recommended tool which allows the disabled individual to appoint a surrogate to make legal and financial decisions when they are unable to do so themselves. The word “power” in the title of the document clearly indicates that this is a legal tool to be taken very seriously. A Power of Attorney allows the appointed agent to perform many legal and financial functions for the grantor, including such tasks as: banking, insurance, real estate, taxes, business, stocks, bonds, safe deposit boxes, and retirement accounts (you can work with your estate lawyer to tailor your Power Of Attorney to suit your specific needs). The agent under a POA can handle and appoint a successor agent. This broad range of abilities has led to abuse, putting the frailest and neediest at risk. In order to reduce the incidence of fraud or misuse of the Power of Attorney, NY State introduced a new Power of Attorney document effective September 1, 2009. The new law provides new safeguards and options. Please note, anyone who has executed a Power of Attorney using the prior NYS form does not have to be concerned that their existing Power of Attorney will no longer be valid. All POA’s signed before September 1, 2009 will still be valid and accepted. After September 1, 2009 the following new features must be included in the NYS Power of Attorney in order to be accepted by financial institutions within the state. The changes to be implemented are as outlined below: