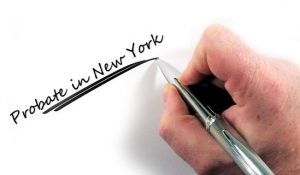 It should be noted that there are numerous assets that can be deemed testamentary substitutes, meaning that due to the nature of ownership or the beneficiary scheme, these items may not be covered under the terms of the will.

For the most part, if an asset is owned exclusively by the testator-decedent (the person who died) and there is no named beneficiary, this asset will fall under the purview of a Last Will and Testament, and ultimately the Surrogate’s Court of the county in which the decedent was domiciled. These assets will have to go through the process known as probate. Or if a decedent died without a will (intestate), the process is known as administration.

Usually, real property will have to go through the probate process as a beneficiary cannot be named on a deed for real property. However, commonly the testator-decedent may reserve a life estate, meaning that they will reside in the premises for as long as they live and pay the carrying costs of the house (i.e., maintenance, taxes). However, when the life tenant passes away, the remaindermen automatically become titled owners.

Finally, a very common form of ownership that will result in assets not passing through the Will would involve property owned by a trust whether the trust be revocable or irrevocable. There are advantages and disadvantages to both forms of ownership, with the irrevocable trust typically created to avoid estate or inheritance tax or to shield assets from creditors. Both forms of trust will avoid the probate process and will likely ensure the seamless management of assets without the necessity for the intervention of the Surrogate’s Court.

Should you require an experienced estate attorney, please contact the Law Offices of Michael W. Alpert at (516) 280-7288 or malpert@alpertlegal.com.