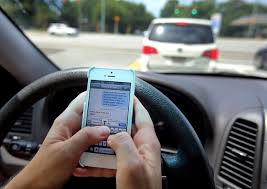 Cell phones are an integral part of our lives; however, we sometimes forget that technology itself can be a double-edged sword: a source of greater productivity and inter connectivity with others, or a potential threat to your personal safety, the safety of others and your livelihood. Cell phone texting while driving has become an increasingly prevalent occurrence among younger drivers in recent years. Due in large part to the many accidents that occur as a result of this behavior, texting while driving is considered a crime in most places.

In fact, according to a recent article (http://www.wicz.com/news2005/viewarticle.asp?a=25686), New York State is cracking down on texting drivers and over 3,000 deaths last year occurred due to distracted drivers. New York’s tolerance for this unsafe behavior is very low and the penalties may be getting steeper.

According to another article (http://gothamist.com/2012/07/13/texting-while-driving_tickets_surge.php), “When Governor Cuomo pushed through his tougher texting-while-driving legislation last year he said it would be “enforced aggressively” and he wasn’t kidding. A year later the number of tickets issued for the crime has soared from 4,569 between July 12, 2010 and July 12, 2011 to 20,958 in the same period last year.”

If you have a cell phone, use it responsibly and follow the law. This means not using it when operating a motor vehicle. If you do, you will be endangering yourself and the lives of others as well as exposing yourself to potential legal ramifications.

Why Texting While Driving Is a Risk

It should come as no surprise that text messaging while driving is a very bad idea. When drivers do this, they are taking their eyes off the road (the biggest mistake you can make) for valuable seconds. As a result, you will be greatly reducing your reaction time. If for instance the vehicle in front of you has to stop suddenly, you will not have enough time to brake safely. An increasing number of rear end collisions have occurred since the advent of this technology. A study conducted by Car and Driver has found that texting while driving impairs an individual’s ability to react more so than if they were intoxicated (to a certain degree).

What Are The Legal Consequences of Getting Caught Texting While Driving?

Many drivers fail to realize that texting while driving is in fact a crime. Yes, you can get pulled over and yes you can get charged with an offense. In some jurisdictions, the crime is classified as a traffic violation, which can result in a ticket. In others, however, it is deemed a misdemeanor. When you text and drive, you place yourself and others at a great deal of risk. This is why most states are cracking down on the act and punishing culprits more severely. Currently, 31 states have laws in place that ban texting while driving, and a majority of these states enforce it as primary. Thus, you can be charged for the offense in itself (Legal Match).

The punishments for this offense vary from state to state, and can include fines, charges, and even jail time if the act resulted in bodily injury to another driver on the road. A criminal record is not something to take lightly. If you are unable to receive a deferred judgment, the offense will be on your record permanently. This can hinder your chances of finding employment and even renting an apartment in many places. Repeat offenses as well as those conducted by commercial drivers are treated more severely. In some instances, fines can reach upwards of $2000.

Texting while driving is something you can easily avoid. If you are going to use your phone in your car, you should do so the right way (although this is a controversial topic). Purchase a hands-free device, as this will ensure you are giving the road your full attention. All it takes is one split second to get in an accident. Many people lose their lives every year because someone was texting while driving. Don’t let that person be you.

Will I Need A Lawyer If I am Charged With Texting While Driving?

Yes. And if that person is you and you need help, we advise that you contact our New York traffic lawyers (call 631-225-4603) to obtain proper legal representation and mitigate the legal issues and charges you will be facing.